The Estate
By
Gene & Georgetti

Mr. Rhoades oversees the daily operation of Exelon’s nuclear plants in the Mid-Atlantic and Midwest regions, which include: Braidwood, Byron, Clinton, Dresden, LaSalle, Limerick, Oyster Creek, Peach Bottom, Quad Cities and Three Mile Island stations. Exelon operates a fleet of 23 reactors at 14 facilities located in Illinois, Maryland, New Jersey, New York, and Pennsylvania. The fleet has the capacity to generate more than 22,000 megawatts of electricity. Rhoades joined Exelon in 1988 and held various positions at LaSalle Station in chemistry, operations, outage support, and work control. He also served as the site’s plant manager, responsible for the day-to-day operations of the plant, and as its site vice president, where he oversaw the safe and efficient operation of the plant. Rhoades was promoted to senior vice president, operations support in 2012 and chief operating officer in 2015. Rhoades earned a bachelor’s degree in chemistry from the University of Illinois. He held a senior reactor operator certificate at Dresden Generating Station. Dave, his wife, Renee, and their two children live in Ottawa, Ill. 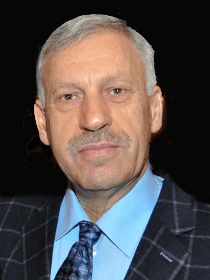 As President of Pro Castle, Inc., Amir Darwish runs all facets of his Athletic Sportswear Company. Amir has a proven executive management track record with over 40 years of experience in business development and strategy. Prior to his position as President of Pro Castle Inc., Amir was an entrepreneur in the food industry, owning and operating several mid-sized grocery stores for 15 years. Born in Palestine, Amir immigrated to the United States in 1968 where he educated himself, built his businesses and raised a family. Amir is extremely active in the community and passionate about his work. He is currently the Treasurer of the Arab-American Business & Professional Association, and the President of the Coalition of Palestinian American Organizations. Amir and his wife Fay have been married for more than 47 years and have four grown children, and seven grandchildren.

David Staples has served as the Outreach Coordinator for the Bureau of Near Eastern Affairs since 2005.  He coordinates speaking and interview requests, conducts strategic engagement throughout the United States to connect with American audiences, and maintains relationships with leaders in the Arab, Muslim, and Jewish American communities. He is also responsible for close coordination with business organizations, think tanks and academic institutions. His prior assignments include Public Affairs Specialist for the Future of Iraq Project (2002- 2005); Press officer (1997 – 2002); and Staff Assistant (1988-1995). From 1995 – 1997 David served as a Special Agent in the Federal Bureau of Investigation.  Assigned to the Los Angeles Field Office, he was a member of the Background Investigation Squad, Civil Rights Squad, and the Violent Crimes Task Force (Gang Squad). David began his career in the Civil Service in 1988.  He has been awarded two Superior Honor Awards and four Meritorious Honor Awards.  He is a retired as a Major in the United States Air Force Auxiliary, Civil Air Patrol, with expertise in emergency services and leadership training. David is a native of Wakefield, Massachusetts.  He holds a B.A. in Political Science and a minor in History from the University of Massachusetts, Boston, as well as attended Army R.O.T.C. at Suffolk University. Mr. Staples is married to Ms. Sarah Jean Harrison, a Foreign Service Officer with the U.S. Agency for International Development.

Now in his twelfth term, Congressman Luis V. Gutiérrez is the senior member of the Illinois delegation in the U.S. House of Representatives.  He is an experienced legislator and energetic spokesman on behalf of his constituents in Illinois’ Fourth District in the heart of Chicago, who first elected him to his seat in 1992. Rep. Gutiérrez is nationally recognized for his tireless leadership championing issues of particular importance to Latino and immigrant communities.  He has been at the center of every major legislative debate on immigration reform and immigration issues for more than a dozen years. He played an instrumental role in advocating for executive action by President Obama to provide deportation relief to certain long-term undocumented immigrants and their families.  The Deferred Action for Childhood Arrivals program that protects some immigrants brought to the U.S. as children from deportation – and a series of executive actions announced in 2014 are partly the result of Congressman Gutiérrez consistent and persistent advocacy in Washington.  But beyond advocating for these initiatives, the Congressman has worked hard in Chicago and around the country to work with immigrants to apply for these deportation protections that keep families together.

Registration for this event is closed.